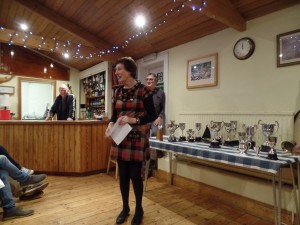 A good crowd turned out to congratulate this year's sailing award winners.  The full list of prize winners is;

Due to a combination of excuses including; poor weather, illness and forgetfulness, there were insufficient cruiser starts to award the other 5 cups (Darling Cup, LSC Cup, Autumn Cup, Jupp Salver & Smith Tankard), so we have amalgamated the results across all the reaming series with a cup allocated to each of the first 3....

Reminder: The Regatta Cup was awarded at the end of The Lympstone Regatta on 10th June 2017;

It is always tempting to have Alan Dixon’s name permanently engraved on this award as he is almost always on hand when a boat needs rescuing, many members still have boats on mooring thanks to his efforts.  However, this year the award goes jointly to two members who bypassed Alan and rescued their own boats, perhaps in the hope that nobody would notice!  David Hawes and Digby Morrison.

Awarded by Freddie Bungard to Richard Crisp for PROVIDING THE AUDIENCE WITH A PRACTICAL DEMONSTRATION OF THE DANGERS OF NOT CONCENTRATING ON THE CRITICAL TASK OF HELMING YOUR CRAFT IN SHALLOW WATERS.